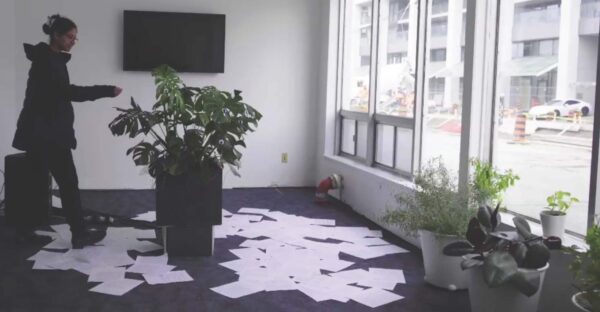 The plant  is “speaking,” or expressing the voice of living things, which might otherwise be construed as silent, mute, and passive. The response of the plant and its root system in real time is a manifestation, metaphor of our being.  Audience members can approach a houseplant, surrounded by printed sheets of paper with data from NASA (National Aeronautics and Space Administration) on extreme temperatures and wind rates throughout the world. Some will touch the plant, hear the sounds from various leaves, and some will glance at the text on the papers. “Storm name: Damrey, data taken: May 9, 2000.

Maximum wind speed: Kilometers per hour 290, miles per hour, 180,  Minimum Pressure in millibars: 878.  Basin region: Western Pacific. ”  Upon interaction with the plant, the EEG medical grade sensors respond with the response of the root systems and leaves of the plant. The recorded audio, mapped to different leaves, includes an imaginary vascular fluid sounds.  Other leaves respond with a woman’s voice: She is speaking Spanish, her native tongue, and English, “I need to breathe…I am having trouble breathing… I can’t breathe,” in an emotional and desperate plea. When the audience walks away, the plant is silent, and only is animated with sound when someone touches the plant.  The employment of human language to plant interaction has been a slow evolution from my works with plants in the 1990’s. In the past, I had used abstract, processed sound, emulating the electrical response that is measured in millivolts, or  1/1000th of a volt.