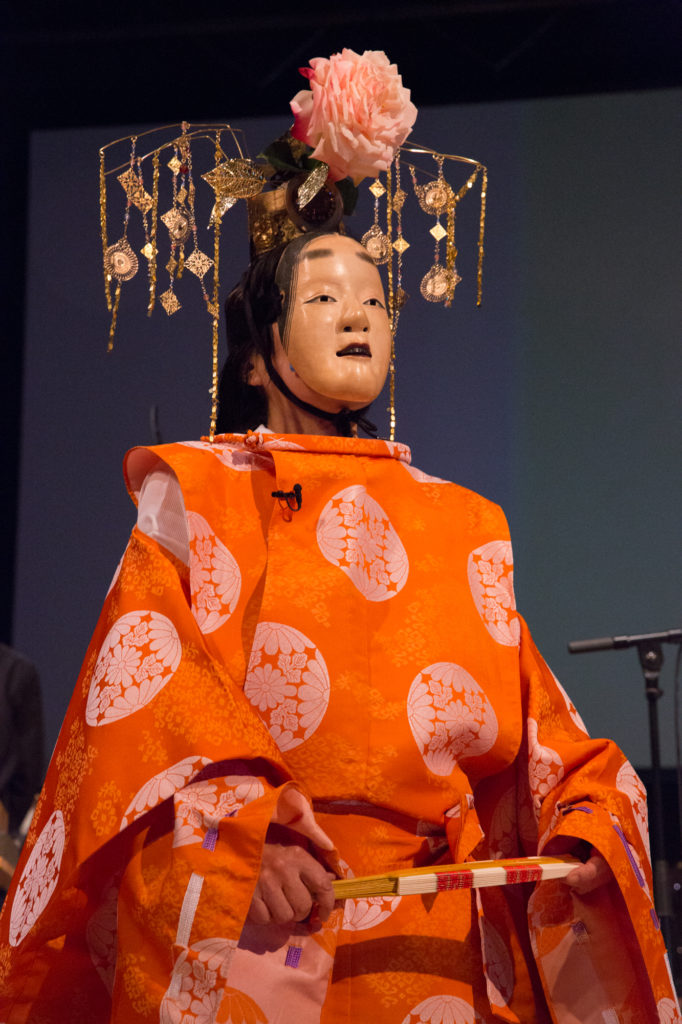 An ancestor on my father’s side, Shiki Masaoka, was from Matsuyama, Japan, where he lived and worked during the nineteenth century and was a major figure in developing modern Haiku and Tanka poetry. He also wrote an experimental Noh play (more info in Bright Red)

that was never performed or translated. In a sense, A Line Becomes a Circle pays tribute to my distant relative Shiki Masaoka, yet brings the text into a contemporary context by setting the words in both Japanese and English.

I was very moved researching his life, and people of the Meiji era, an era that quickly and abruptly transitioned into modernity (my grandparents were born in the Meiji era in Japan).

Haiku is a highly condensed and minimal form. What is not being said, and words that remain can be considered — what I call “the non blank space” — is a kind of materiality and exists in a certain form of minimalism in both gagaku music, visual art and poetry in traditional Japanese arts.

Most of the poetry in this work was written when Shiki was a young man at the height of his creative life, but dying from tuberculosis at the age of 32.

The title of A Line Becomes A Circle is my idea of  ‘a play on words’ from the quote by the Indian Hindu Monk, Swami Vivekananda, living in the same time period but of course a different location from Shiki Masaoka. Tanka poems have five lines, and there are five lines in a pentagon shape that can be curved to morph into the form of a circle. This circle graphically represents endlessness not only in temporality, but in all things as well as implying movement and motion — the act of transformation, evolution and things not staying the same but becoming something different, embracing a new identity. Here is the original quote:

Shiki Masaoka was known for breaking many of the Haiku “rules” as he introduced humor, everyday life and other forbidden subject matter in Haiku. He also at times refused to include a season of the year in every haiku, a previous requirement.

Two important haikus in A Line Becomes A Circle are:

If someone asks
tell them I am still alive
autumn wind

I envy myself the wanderings I once had.
Cramped and cringing, I never go out the gate,
Thinking only how the rounding years go by.

Other notes:
Shomyo singing is unusual in the lexicon of Japanese music, as improvisation is a part of the tradition.
The video was filmed at the Masaoka Castle ruins in Matusyama, Japan. Editing by Alice Baird.

Miya Masaoka resides in New York City and is a classically trained musician, composer and installation artist. She has created works for traditional Japanese instruments, chamber ensembles, symphonic orchestra, mixed choirs, telematic performances and designed interactive wearable textiles. She has composed pieces using spatialization, sonification of data, and has mapped behavior of plants, brain activity and insect movement to sound. The Wire publication calls her work, “virtuosic, magnificient…essential.” She has is a Fulbright Fellow to Japan 2016, where she researched Noh, Gagaku and the mono chord ichi gen kin. She is the Director of MFA Sound Art at Columbia University.

She has studied with Hisa Uzawa, a Noh actor of the Kanze School, and for many years with Suenobu Togi, a Gagaku Imperial Court master musician. She recently studied and had a premiere in Seuol, Korea with two musicians from the National Gugak Traditional Music Orchestra performing the Geomungo and the Changgu. She has been commissioned by and had performances by Bang on a Can, So Percussion, Joan Jeanrenaud, Kathy Supove, Del Sol, The La Jolla Symphony, Either/Or, James Ilgenfritz, Piedmont Choirs. Her symphonic orchestra and choir piece was performed by the BBC Scottish Symphony and Glasgow Chamber Choir.

Makiko Sakurai is a vocalist and dancer specializing in the Heian Period.: Since 1986 Makiko Sakurai has studied Shomyo, with the Tendai sect of Buddhism, with teachers Genshin Nakayama from 1989.

In 1994 she received a scholarship from the ACC (Asian Culture Council) to study the Navajo language at Navajo Community College in Arizona.

Soprano Ann Moss is an ardent and acclaimed champion of contemporary vocal music who performs and collaborates with a dynamic array of living composers. Her high, silvery, flexible voice has been singled out by Opera News for “beautifully pure floated high notes” and by San Francisco Classical Voice for “powerful expression” and “luminous tone.” In addition to working closely with well-known composers such as Jake Heggie, John Harbison, Kaija Saariaho and Aaron Jay Kernis, Ann seeks out and performs music by emerging voices at forums and festivals across the USA. As co-founder and Artistic Director of new-music repertory group CMASH, Moss has been personally responsible for the creation and premiere of over eighty art songs, works of vocal chamber music and operatic roles, and has been a featured soloist with Left Coast Chamber Ensemble, SF Contemporary Music Players, Earplay, Eco Ensemble, the Ives, Alexander, and Hausmann String Quartets, Composers in Red Sneakers, at FENAM, Other Minds Festival, Fresno New Music, PARMA and Switchboard Music Festival, among others.

Percussionist Chris Nappi has appeared throughout Europe, Scandinavia, and the US with the SEM Ensemble, Newband, The New Music Consort, Steve Reich and Musicians, Ben E. King, and John Wesley Harding. As a composer he has created music for the dance, theatrical productions and multi-media installations and has recorded for the Columbia, Ear-Rational, Mode, New Tone, Rene Block Editions, Tzadik, and Wergo labels. He serves on the faculties of East Carolina University and the Manhattan School of Music Precollege.

Deep gratitude to the performers, Makiko Sakurai, Ann Moss, Chris Chappi, Joel Davel, and Circuit Network, Elisabeth Beaird, the ICA, Mark Christman and generous support from The Japan Foundation, the Doris Duke Artist Ward, and special thanks to the translators of the kanshi poetry, Yuko Otomo and Makiko Sakurai.